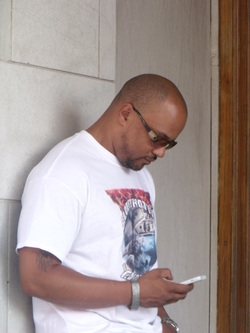 Maurice Jones,Born in Jersey city, New Jersey  better known by his stage name KILO M.O.E is an American rapper,  National Level Bodybuilder, and Personal Trainer. He was coined KILO M.O.E from his popularity and fame in the streets of Topeka, Kansas. He gets his nickname KILO from his infamous street time in Topeka  and M.OE stands for "Money Over Everything".

In 1997 KILO M.O.E was arrested In Federal Drug charges and sentenced to 5 years. KILO M.O.E was released in 2002 to Baltimore where he had a strong family supports system, he made several attempts at establishing an independent movement with very little success.

Mid 2002 KILO M.O.E decides to utilizes his other skill sets to established a career as a National Level Bodybuilder and Personal Trainer while still making attempts at establishing contacts in music industry. Winning multiple awards. the most notables ones are NPC Maryland and Florida.

In 2012 after being sidelined by a sports injury, KILO M.O.E was going threw a deep depression and decide to buy some used studio equipment and started recording again posting music online as a hobby.

KILO M.O.E has performing on and off over 20 years and has a very well respected resume of accomplishments in several businesses and in the streets.
KILO M.O.E has dropped 3 mixtapes and working on the fourth since his reemergence utilizing the internet as his forum! Coming Soon In Late 2013 his forth mixtape titled "Globetrotter Exclusive" Available Now!